İsmail Gülle, Chairman of Turkish Exporters Assembly (TİM), stated that the foreign logistic center will accelerate the Turkish exporter's access to new markets and, “We have carried out a detailed study for the logistics center we plan to open in the USA. We have a target of 100 billion dollars in foreign trade volume with the USA We believe that the logistics center to be opened is of great importance for us to achieve this goal quickly” he said.

Turkish Exporters Assembly (TİM), the only umbrella organization of 100 thousand exporters with 61 exporter associations and 27 sectors, continues its efforts to quickly reach its 100 billion dollars foreign trade volume target with the United States, the world's largest importer. The Turkish exporter, who makes to wave the Turkish flag in 226 countries and regions last year, exported 10 billion 186 million dollars to the United States in 2020, an increase of 13.5 percent, despite the contraction of the global demand due to the pandemic. Exports to the United States, one of the markets where Turkish exporters work intensively in the pandemic process, increased every month in 2020. The USA became the third most exported country.

After the end of the pandemic period, it is expected that exports will increase further to the United States and that 100 billion dollars in bilateral trade will be reached in the future. In this context, work is being carried out to open a logistics center in the United States. At the meeting on 'USA Logistics Center Opportunities for the Textile, Furniture, and Carpet sectors organized by TİM, new steps to be taken with joint consultations on the logistics center in question were evaluated.

“Costs will fall, the Ministry will support the exporters”

Speaking at the meeting, TİM Chairman İsmail Gülle pointed out that work has been carried out under the leadership of the Ministry of Commerce for some time for the launch of foreign logistics centers abroad, and said, "West Africa and North America stand out as the location of logistic centers. Activities continue in West Africa, especially Ghana. In North America, we conducted a detailed study for the logistics center we plan to open in the USA. We have a target of 100 billion dollars in foreign trade volume with the U.S. To achieve this goal quickly, we believe that the logistics centers to be opened are of great importance. We need to determine the location of the logistics center by considering the maximum benefit of our sectors.  Sectoral clustering is an important factor that forms the basis of superior competitiveness and economic development. With the sectoral clustering that will occur in our logistic centers, there will be significant decreases in the costs of our exporter. Also, our exporters will benefit from the support provided by our Ministry.”

Emphasizing that they analyzed Türkiye's export according to the provinces of the USA to determine the position of Logistic centers correctly, Gülle noted: “Especially we calculated the market shares of the Carpet, Furniture and Home Textile sectors in the provinces. In the first 11 months of 2020, a market share of our carpet industry was 78 percent in the state of Maine, 60 percent in South Carolina, 48 percent in New Jersey, and 45 percent in New York. Our furniture industry has a market share of 11 percent in Delaware Province in the same period, 5.4 percent in Missouri, 1.7 percent in New Jersey, and 1.4 percent in Washington. In the furniture industry, we see that our market share in other states is below 1 percent. In home textiles, our market share is 25.4 percent in Connecticut, 8.3 percent in Maine, 7.3 percent in Wisconsin, 6.7percent in Massachusetts, and 5.9 percent in South Dakota. It is understood that our country has a serious dominance in the market in some states especially in carpets and home textiles. We must take this data into account in determining locations and sectors for logistics centers. Besides, the importance of electronic commerce increased rapidly during the pandemic process.

Noting that the overseas logistic centers will be a regional base for the exporters, will reduce costs of market access, and will accelerate to access to new markets, İsmail Gülle continued, “While determining the locations of our logistics centers, we will consider the e-export opportunities as well as the physical exports of our exporter to the region. We will also respond to the needs of our e-exporting companies. We want to accelerate our work in this field with contributions from sectors and put our logistics centers abroad into operation as soon as possible.

2020 statistics that attract attention in exports to the USA

*Chemicals and Products: 835 million 823 thousand dollars, with an increase of 12.7 percent

*Ready-to-Wear and Apparel: 793 million 626 thousand dollars, with an increase of 22.6 percent

Steel Sector: 430 million 830 thousand dollars, with an increase of 59.0 percent

*Mining Products: 389 million 849 thousand dollars, with an increase of 4.7 percent

*Textiles and Raw Materials: 360 million 300 thousand dollars, with an increase of 6.2 percent

*Electrical-Electronics: 274 million 736 thousand dollars, with an increase of 11.4 percent

*Furniture, Paper, and Forest Products: 234 million 974 thousand dollars, with an increase of 59.1 percent

*Fruit and Vegetable Products: 208 million 189 thousand dollars, with an increase of 13.2 percent 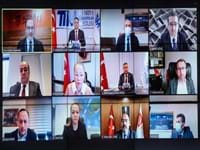 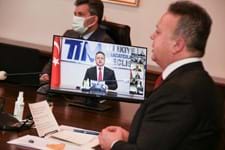