The Goal Is a Climate-Friendly Export

Ambassador Chilcott said, “We are committed to tackling climate change by working with strong international partners such as Türkiye on the road to net-zero.”

TİM Chairman İsmail Gülle said, “As Turkish Exporters Assembly, we are very excited about the mobilization we have launched on behalf of a sustainable world that we have entrusted from the past and will leave a legacy to the future. By taking turns fulfilling the 12 objectives in our action plan, we will make Türkiye a brand country in the field of sustainability and we will make an important step in trade between Türkiye and the United Kingdom.”

The first program was held on July 14, 2021, with the participation of the President of the EU Delegation to Türkiye, Ambassador Nikolaus Meyer-Landrut. The second of the TİM Climate Talks program, moderated by Istanbul Topkapi University Rector Prof. Dr. Emre Alkin, with the participation of TİM President İsmail Gülle and the UK Ambassador to Türkiye Sir Dominick Chilcott.

The second of the TIM Climate Talks was attended by the TİM Climate Committee, TİM Women's Council, TİM industry sustainability science committee members and exporters, SMEs, entrepreneurs, NGOs, and all relevant stakeholders of the ecosystem. Throughout the program, 15,000 people were accessed throughout all digital platforms.

Stating that 41 percent of Türkiye's $225 billion in export in 2021 were made to 27 European Union countries and that the ratio of sectors' exports to the EU market to the EU market in 2021 varies between 11 percent and 74 percent, TİM Chairman İsmail Gülle, who made the opening speech of the Climate Talks program, said, “On a sectoral basis, the average of these rates is around 40 percent. That is 54 percent, including the United Kingdom and the United States, which have put similar legislation on the agenda of the Green Agreement. This significant volume of trade could mean a hefty carbon tax if the right steps are not taken.”

Emphasizing that as the umbrella organization of the export family, they have taken responsibility for green transformation, TİM Chairman İsmail Gülle mentioned the projects they have implemented: “We started this struggle by establishing the TİM Climate Committee.” We shared our TİM Sustainability Action Plan, which consists of 12 main goals, with the motto 'To produce for the world without consuming the world', with the public in June last year. In this direction, we established the Sustainability Science Committee in TİM Industry with a very comprehensive staff consisting of representatives of universities, public and private sectors, national and international NGOs, and financial institutions.

Our science committee takes an important responsibility in the green transformation process by guiding our sectors in determining and implementing sustainable policies in the industry. Under the guidance of our committee, we started to create our sectoral action plans with the initiative of our members.  In July 2021, we announced our sectoral action plans for the Textile sector and last month for the Agriculture and Livestock sector. We have organized many activities and training programs to raise awareness of the strategies and regulations of countries, especially climate change, in the field of sustainability with a focus on green transformation and green reconciliation.

Stating that it is very valuable to crown the friendly relations between Türkiye and the United Kingdom with concrete steps and that they have given an 8-billion-dollar foreign trade surplus to the United Kingdom, one of Türkiye's largest trading partners with a trading volume exceeding 19 billion dollars in 2021, TİM Chairman İsmail Gülle said, “Our export to the United Kingdom are also performing strongly in 2022. In the first quarter of the year, our export increased by 13 percent compared to the previous year and exceeded $3.2 billion. I hope that today's meeting will take these strong relationships further. On this occasion, I reiterate our invitation to all our industrialists, producers, suppliers, and exporters to a production approach that prioritizes nature, and the environment.”

“By fulfilling the 12 objectives in our action plan step by step, we will make Türkiye a brand country in the field of sustainability”

Emphasizing that as Turkish Exporters Assembly, they are very excited about the mobilization they have launched on behalf of a sustainable world that they have entrusted from the past and will leave a legacy to the future, TİM Chairman İsmail Gülle said, “By fulfilling the 12 targets in our action plan step by step, we will make Türkiye a brand country in the field of sustainability and we will make an important step in trade between Türkiye and the United Kingdom.”

The UK Ambassador to Türkiye gave the message, “We are committed to tackling climate change by working with strong international partners such as Türkiye on the road to net-zero.”

The UK Ambassador to Türkiye, Sir Dominick Chilcott gave important assessments on the UK's climate change policy, the importance of bilateral trade, its size, past and future, and cooperation in the field of renewable energy.

Sir Dominick Chilcott, the UK ambassador to Türkiye, who was a guest on the TİM Climate Talks program, said, “The greatest opportunity for our bilateral trade in terms of green transformation is the complementary expertise of the two countries. Türkiye has shown impressive growth in renewable energy, and almost tripled its renewable electricity production over the past decade. In this area, Türkiye has made significant progress in domestic manufacturing. On the other hand, the United Kingdom has high-level expertise in technologies such as power electronics, solar energy, and hydrogen as clean energy and global leadership in low carbon and renewable energy services and green financing for offshore offshore wind energy, and low-carbon vehicles and electric motors.”

Following the opening program, cooperation opportunities between the United Kingdom and Türkiye for green transformation goals were evaluated, while questions from industry representatives regarding green transformation were answered by Sir Dominick Chilcott, the UK Ambassador to Türkiye, and David Machin, Trade Attaché of the British Embassy. 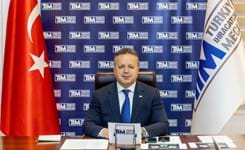