Born in Sivas in 1960, İsmail Gülle has completed his first and secondary education in the same city.

Mr. Gülle graduated from İstanbul Technical University, Faculty of Electrical Engineering in 1982 and obtained an MBA from Istanbul University Business Administration Institute. In 1970, he took over the role of Chairman of the Board of Directors of Gülle Entegre Tekstil İşletmeleri A.Ş., founded by his late father Halis Gülle.

Between 1999 - 2003, Mr. Gülle has successfully carried out his duties within Istanbul Textile and Raw Materials Exporters' Association as a Board Member. Between 2003-2018, he held the following positions: Chairman of Istanbul Textile and Carpet Exporters' Association (İTHİB), Member of the Sectors' Council at the Turkish Exporters Assembly, Assembly Vice President at the Istanbul Chamber of Industry, Chairman of the Industrialists and Businessmen Association from Sivas.

He currently holds the positions of Chairman and Member of the Board of Trustees at Ergene-2 Organized Free Zone, Member of the Eximbank, Vice President of DEİK, Member of the Economic Development Foundation, Chairman of the Textile and Raw Materials' Sector Board.

Mr. Gülle has recently been elected as the Chairman of the Turkish Exporters Assembly (TİM) at the 25th General Assembly held on June 30, 2018.

Mr. Gülle is supporting education by way of the schools he has had constructed in Sivas and its villages as well as many individual and institutional scholarships he has provided to secondary and higher education students. İsmail Gülle is married, with two children.

İbrahim Pektaş, who was born in Malatya in 1953, graduated from Çukurova University, Faculty of Economics and Administrative Sciences in 1976. Having completed his Master's Degree in Macro Economics at the University of Western Illinois (USA), Pektaş began his career as an Assistant Inspector at the Ministry of Labor in 1977, served as the Head of the State Planning Organization Export Promotion Group in 1980. He continued his career as a Consultant to the Ministry of State in 1988 and in 1989, he became a Member of Audit Committee, Member of the Board of Directors and Assistant General Manager at Turkish Airlines.

From 1992 until the present day, he has been serving as a Member of Board of Directors for all the companies under the umbrella of Diler Holding A.Ş., the Deputy Chairman for Diler Demir Çelik End. Ve Tic. A.Ş., Diler Dış Ticaret A.Ş., Yazıcı Demir Çelik San. Ve Tur. Tic. A.Ş., Diler Yatırım Bankası A.Ş. and a Member of Board of Directors for Asil Çelik San. Ve Tic. A.Ş.

Born in 1963, graduated from the Anatolian University Faculty of Economics.

Zeki Kıvanç is the President of the Adana Chamber of Industry since 2013. He is the Vice Chairman of the Board of Directors and Deputy Director General of Kıvanç Tekstil Sanayi ve Ticaret A.Ş. that is the Top 1000 Industrial Companies of Turkey and has over than 1350 employees.

Layne Bowler A.Ş/Executive Member of Board

Military service carried out at Turkish Naval Forces Headquarters, Technical Department, as a liutenant responsible from training of maintenance and repair foremen (1987-1988).

Başaran Bayrak was born in Trabzon, on 9th of October, 1959. He was graduated from the Marmara University, Faculty of Communications in 1982.

He was one of the founding members of ÇEKSAN limited company established in 1978. In 2004, by changing of Çeksan into joint stock co, Başaran Bayrak became vice president. In 2000, he and his business partners from Çeksan, jointly founded Bayrak Maritime Joint Stock Co.

He was also involved in executive board of GİSAŞ, the company founded by members of Turkish Shipbuilders Association, as financial executive director between 2001 and 2006 and vice chairman between 2006 and 2008.

In April 2010, he was voted into chair of newly founded Turkish Ship and Yachts Exporters' Association by total of all 42 votes and consequently he is entitled as first chairman of the association.

Today he is still in position of vice president and general manager of Çeksan Shipyard, Bayrak Maritime and Baytaş Tanker and also Councillor of Chamber of Shipping and Chairman of Turkish Ship and Yacht Exporters Association.

He is married with children. 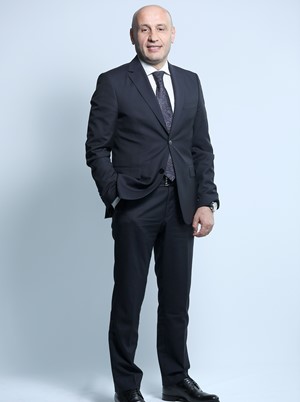 Mr. Gültepe was born in Tonya/Trabzon in Turkey in 1968. He graduated from Industrial Engineering Department of Dokuz Eylül University in 1990 and started his career at Taha Tekstil in 1992. He is the Co-founder and Chairman of Talu Tekstil, which was founded in 1994 as a member company of Taha Group. For the last 25 years, he is actively in charge of executive management in the apparel industry, both in production and export operation levels of the supply chain management of ready-wear products. He has production facilities in Istanbul, Sakarya and Malatya, in which about 1800 people is employed.

He completed his Masters Degree in Business Administration (MBA) in Istanbul University in 1997.

Gültepe is within the Management Board of İHKİB since 2006. He worked as the Vice Chairman of the Board since 2014 and became the Chairman of İHKİB in the elections held in April 2018. He is also the Chairman of Sakarya 1st Organized Industrial Zone.

He is married and has three children. He speaks English fluently.

Davut ER, was born in 1965 in Aydın province, graduated from Dokuz Eylül University, Faculty of Economics and Administrative Sciences, department of Business Management. ER started his business life in 1988 by trading olive, olive oil and dried fig. For long years, he has taken part in Board of Directors of Aydın Commodity Exchange. Between the years 1999-2001, he ran the position of Chairman of the Board. He also ran as President of Assembly of Aydin Commodity Exchange between 2004-2005. He was elected as Board Member of Aegean Olive and Olive Oil Exporters Association (EZZIB) in 2006. Er, who worked as EZZİB Vice Chairman in 2014, was elected as Chairman of EZZIB in May the 11th, 2016. Davut ER speaks English besides Turkish. He is married and father of three.

He graduated from İstanbul University Management Department in 1983.

He is one of the partners of MYM Gayrimenkul Construction Industry and Trade inc.

He speaks English at intermediate level, is married with two children.

He joined the Koç Group in 2002 and worked as the Coordinator of the Finance Group and of the  Audit Group. In April 2005 he was assigned as Assistant General Manager of Finance & Accounting of Arçelik AS. From February 2015, he serves as President of Consumer Durables at Koç Holding AS.

Born in Istanbul in 1978, Melisa Tokgoz Mutlu graduated from Koç University, Department of Psychology. Having started her business life as a manager at Cherry Valley Food Industry in 1998, Mutlu is still working as the General Manager of the mentioned company. Additionally, Mutlu, who is also a Senior Manager in the Futem Representation Company, has been the Chairman of Sector Council of Fresh Fruit and Vegetable Products since 2012. Mutlu is married with 2 children.

Born in Bursa in 1951, Orhan Sabuncu completed his elementary and middle school education there. In 1970, he started studying Mechanical Engineering at Yıldız Technical University and, upon graduating in 1975, later worked at an engineering company in Istanbul for two years. After completing his military service, he started working as a construction engineer at Teknik Malzeme in Bursa in 1978 and was appointed as General Manager in 1985. In 2002, he was appointed as the chairman of Orhan Holding's automotive seating group and he still serves as a Board Member at Holding companies.

Between the years 2006 and 2010, Mr. Sabuncu was a Board Member of TAYSAD (Association of Automotive Parts and Components Manufacturers) and OIB (Automotive Industry Exporters' Association). Between 2010 – 2018, he served as the Chairman of OIB and between 2016 – 2018, he was a Member of the Board of DEIK (Foreign Economic Relations Board). Since 2018, Mr. Sabuncu has been serving as Vice Chairman of the Board of OIB and since June 2018 he has been serving as a Board Member of TIM (Turkish Exporters Assembly). He is competent in English.

Salahattin Kaplan was born in 1967, in Gaziantep. He has been experiencing approximately 30 years in Carpet Industry as one of the most important producers and exporters of machine-made carpet sector in Turkey.

He presently acts as;

Kaplan is married with six children.

Zeki Poyraz was born in Kayseri in 1962. He studied Persian Language and Literature in Ankara University. He graduated in 1985, during his high school and university years he worked in several different sectors as an intern.

As he worked with his father in his construction company he co-founded manufacturing companies from various sectors including food industry (cube sugar), ventilation, cast iron and steel.

He is married with three children.